Afera, The European Adhesive Tape Association, hosted the biennial Global Tape Forum (GTF) and Global Test Methods Committee (GTMC) meetings at the Sheraton Munich Arabellapark Hotel in Munich, Germany, on 12 June 2018. The meetings marked the first day of Afera’s 1st Global Adhesive Tape Summit, which brought together companies along the adhesive tape value chain of not only Europe, but Asia, North America and the Middle East, for 4 days of learning and networking with over 230 industry leaders. 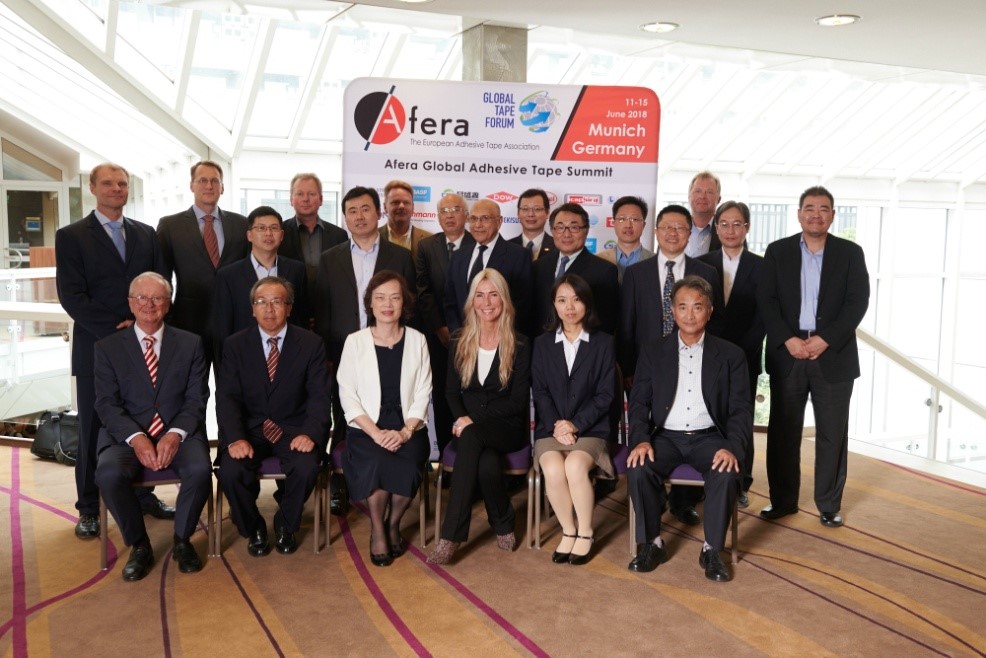 Under the theme of “Collaboration”, Afera had formulated the Summit to incorporate critical technical and market aspects of the European adhesive tape business with key international meetings of the regional industry associations and their test methods experts. Nearly 30 delegates from the national/regional adhesive tape associations of China (CATIA, The China Adhesives and Tape Industry Association), Taiwan (TAAT, The Taiwan Regional Association of Adhesive Tape Manufacturers), North America (PSTC, The Pressure Sensitive Tape Council) and Japan (JATMA, The Japanese Adhesive Tapes Manufacturers Association) gathered at the GTF and GTMC’s 6th set of biennial meetings to work through agendas loaded with standardisation issues such as harmonising test methods (TMs) and guidelines, sharing market statics and trends, comparing environmental legislation and classifying of tape products, identifying world markets not yet organised, and reporting on demand increase initiatives.

“The GTF brings us global players even closer together in sharing common goals for expanding the application of tape and consequently our members’ markets,” commented Michael Yang, GTF chairman and CATIA secretary general. “The reason we came to Munich with a particularly large delegation is that we wanted to expand our knowledge and to develop our contacts in the global industry.”

Michel Merkx, incoming GTF vice chairman, PSTC president and general manager at American Biltrite, Inc. - ABI Tape, said, “The PSTC is proud to be part of a forum that believes in and drives harmonisation, collaboration and transparency supporting global growth and improvement of our industry, markets/application and customers.”

Of important note was the GTF members’ renewed commitment to “bring content to their objectives”, particularly in the area of exchanging information. The idea is that globaltapeforum.com should be a source for each member association of information about top-level market production data and trends, environmental regulation, meetings and events of the other countries and regions. They also plan to circulate their newsletters and publications.

Progress was also made in the GTF’s objective to “harmonise key TMs”. “At the GTMC meeting, we adopted the Thickness TM and Width & Length guideline as GTF standards 6002 and 6003,” reported Astrid Lejeune, GTF secretary and Afera secretary general.

“Perhaps more importantly, we decided to adopt the ISO methods Peel Adhesion, Breaking Strength & Elongation, and Static Shear Adhesion as GTF TMs 6004, 6005 and 6006,” Ms. Lejeune explained. “This lends even greater legitimacy to the global status of our co-operation.” 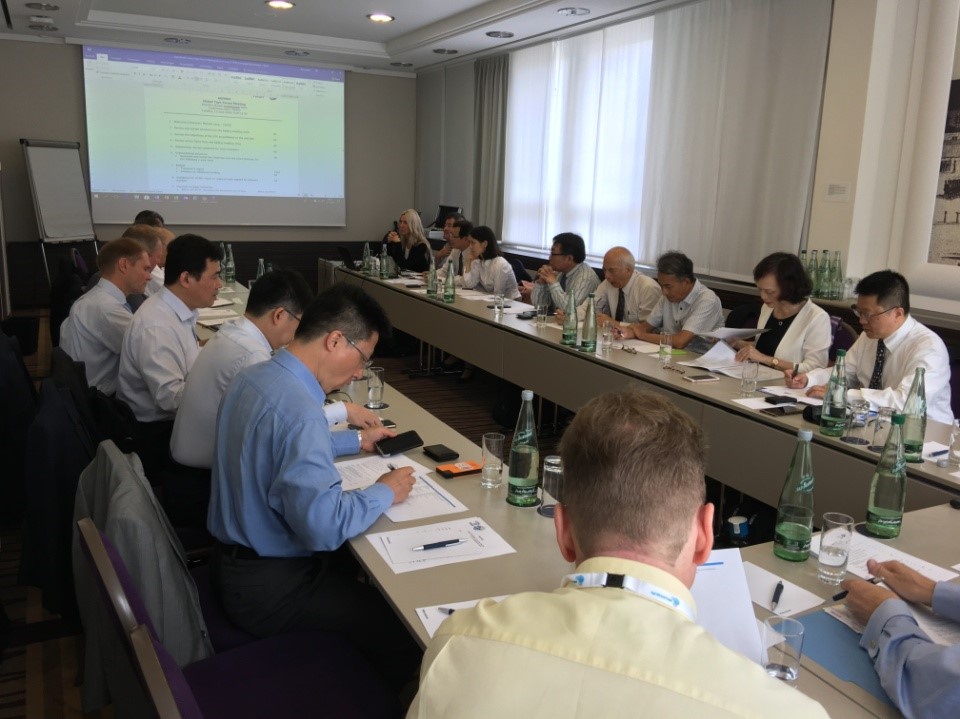 A new Loop Tack TM has been finalised by Afera and is on its way to international approval. A Methodology to Develop Measurement Uncertainty TM has been agreed upon by the PSTC and Afera and could be adopted as a GTF guideline. A Dynamic Shear/Lap Shear TM is under development, led by the PSTC, which also announced its launch of a Test Panel Cleaning Study. Confronted with unexpected results, JATMA’s proposal to initiate a Peel Adhesion Depending on Test Plate Surface Roughness TM has been put on hold.

At the GTMC meeting, members also approved a procedure for developing and accepting new GTF TMs, that was drafted and proposed by the PSTC. “We feel positive about the establishment of Mr. Malhotra’s procedure for harmonising new standards, and we especially look forward to conducting Round Robin tests,” said Mr. Kensei Takahashi, JATMA secretary general.

“In Japan, we have worked under a different system,” Mr. Takahashi continued. “Until now, we have just evaluated each of our member companies’ level of interest in developing and using various TMs, and we have not been as theoretical in calculating and analysing our results.”

“With the new harmonisation procedure in place, we feel positive that our global industry collective will be able to increase our speed and efficiency in reaching our final result, a new GTF TM,” commented Kim Sung, TAAT chairman.

The GTF members also discussed possibly expanding its membership to include other parts of the globe. The markets of India, Brazil, Mexico, Korea, Vietnam and Bangladesh were examined.

During the Global Tape Summit, multiple presentations were delivered by delegates from each global region represented in the GTF. Session 1 kicked off with global and national market overviews, most of which were first reviewed in the GTF meeting the day before.

China
With steady technological progress and improved efficiency and quality, China’s tape industry will maintain an annual growth rate higher than that of GDP, around 7%. In 2017, its adhesive tape output was 23.4 billion square metres (bsm). 54.7% of this was BOPP packaging tape, and 16.2% was label and graphics tapes. The fastest growth seen last year was in crepe paper masking tape at 27.7%. The greatest decline was seen in PVC electrical tapes which decreased 9.2% in production.
China exports its tape, which totalled $3.746 billion in 2017, mainly to the U.S., India and Vietnam. E-commerce sales boosting the use of packaging tape, increasing automobile sales and production, and demand for electronics and electrical appliances, the latter 2 requiring high-value-added tape products, are the main trends driving tape production in China.

Increasing solvent replacement with emulsion toward a VOC reduction policy will be a major trend. Another will be increasing special tape demands for specific electronics applications. In the face of increasing plastics production and waste, Taiwan is seeing products, specifically a functional, biodegradable BOPP film made with PP resin, launched into the market.

Japan
Japan makes up less than 10% of the global tape market in sales, which in 2016 were $3.7 billion, and its market volume is slowly shrinking. Declining gradually over the last decade, Japan’s 2017 sales volume was 953 million square metres (msm). The overall price of tapes has risen 11% over the last decade. Japan’s tape production is 41% paper tape (80% of which is Kraft tape) and 36-39% film tape. Double-sided tape has only risen from 5% to 7% of Japan’s total tape volume over the last decade, but it had the highest percentage of sales value at 29% in 2017. Its total volume has increased consistently (21%) over the last 10 years, and it will continue to do so.

Increasing export sales, which lead Japan’s tape production, are mainly to China, Korea and Thailand. Most imports come from the U.S.A., China, South Korea and Indonesia, and they are gradually taking over the Japanese domestic market for conventional tape products.

North America
Instead of presenting production figures, Mr. Merkx reported on the results of a recent study conducted as part of its programme to stimulate the demand for adhesive tape in new areas. By identifying the industries and applications that are most likely to convert their current bonding methods to tapes, the association aims grow the market for its members.

Europe
This year, Afera offered market production data to the GTF through the presentations of 2 market reports. The first, “PSA tape market data and trends: 2016 Freedonia Study,” was a presentation given by Matthias von Schwerdtner, corporate vice president of the business unit on specific industrial markets at tesa SE and an Afera Marketing Committee member, at Afera’s recent Turin Conference. According to Freedonia, world adhesive tape demand is growing faster than global GDP (4.3% over 3.5%); thus tapes are gaining market share globally.

In Western Europe, adhesive tape production will rise a modest 1.2% annually to 6.3 bsm in 2018. In Western Europe, rebounding construction activity following a long period of decline will boost the use of masking and other tapes. Italy remains Europe’s leading manufacturer, supplying much of the market in both Western and Eastern Europe. Western Europe will have the market edge with specialty tapes, gradually replacing solvent-based adhesives with environmental, waterborne and hot melt types.

The second report, the “AWA Global Specialty Pressure-sensitive Tape Market Study 2018,” was exclusively previewed by Corey Reardon, president and CEO of AWA Alexander Watson Associates, during the general Global Tape Summit working programme on 13 June. According to AWA, which will officially release the report later in 2018, global adhesive tape volume was 46.6 bsm in 2017, and 18% of this market lies in Europe.

During these presentations, English-Chinese interpreting was provided. “The language services organised for us were perfect!” Mr. Yang added. “The Chinese delegation was very happy with all of Afera’s arrangements.”

Munich marks the GTF and GTMC’s 6th set of meetings, which began in Orlando (2009) and were then held in Stockholm (2010), Taipei (2012), Nashville (2014), and Beijing (2016). CATIA’s Mr. Yang retains the GTF chair, while the PSTC’s Mr. Merkx has become vice chairman. The PSTC’s Kiran Malhotra, product development director at Berry Specialty Tapes, has taken over as GTMC chairman, as Afera’s Mr. Lutz Jacob, Afera TC TMs consultant and convenor of CEN TC 193, is retiring after 10 years of leading the group. Afera’s Uwe Maurieschat, adhesive engineer at Fraunhofer Institute IFAM, has assumed the position of GTMC vice chairman. Ms. Lejeune will continue to act as secretary for both groups.

The next GTF and GTMC Meetings will be hosted by JATMA on 16-19 November 2020 in Osaka, Japan. For more information, visit www.globaltapeforum.com or contact Astrid Lejeune, GTF Secretariat.

JATMA, the Japanese Adhesive Tape Manufacturers Association, will host the 7th edition of the GTF and Global Test Methods Committee Meetings on 17-19 November 2020 at the Osaka International Convention Centre.

Creating the GTF Afera SC Strategy Subgroup Member Mike Ayres of Advance Tapes (U.K.) has been leading the Global Tape Forum (GTF) project for the last 2 years. At Afera’s recent Stockholm Conference, he explained that the GTF’s second meeting took place on 6 October, and that he was happy to report that the GTF was firmly off and running.